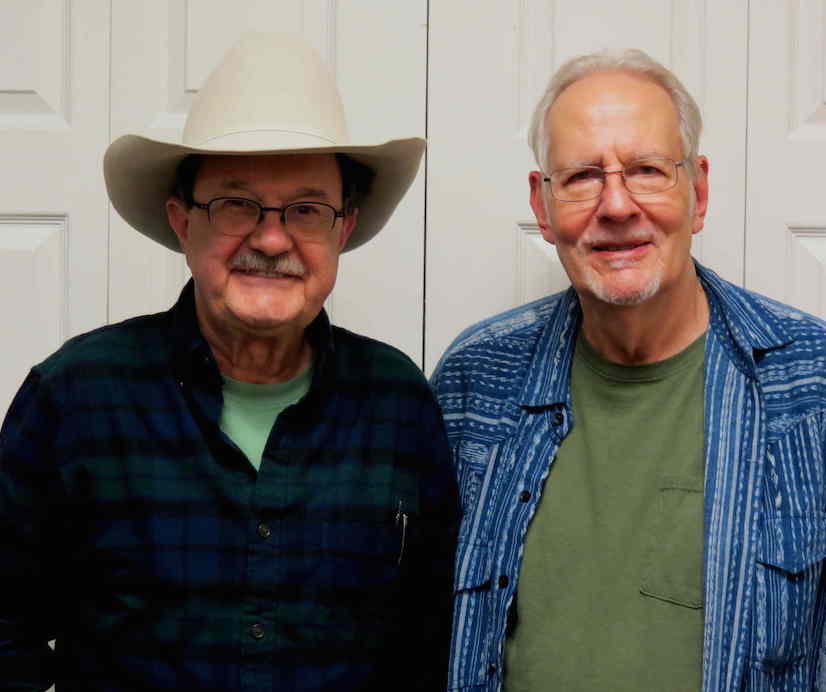 Jim Hightower is Thorne Dreyer's guest on Rag Radio, and it's always a great honor -- and a lot of fun -- to have Jim on the show! Our primary topic is the midterm elections and about the political path ahead. "Populist road warrior" Hightower is a progressive political activist who is on the national board of the Bernie Sanders-initiated Our Revolution and is active with Our Revolution in Texas. A former twice-elected Texas Agriculture Commissioner -- and former editor of the Texas Observer in the late '70s -- Hightower is a nationally-syndicated columnist and radio commentator, activist, and public speaker. He is a New York Times bestselling author (Thieves in High Places) and he broadcasts daily radio commentaries that are carried in more than 150 commercial and public stations. His writing and commentary are right out of the Will Rogers/John Henry Faulk/Molly Ivins tradition.Photo above: Jim Hightower, left, and Thorne Dreyer. Photo by Roger Baker / Rag Radio.
Rag Radio is produced in the studios of KOOP 91.7-FM, an all-volunteer, cooperatively-run, solar powered community radio station in Austin, Texas, in association with The Rag Blog and the New Journalism Project, a Texas 501(c)(3) nonprofit. It is streamed live on the Internet at KOOP.org and Radio Free America. The host and producer of Rag Radio, Thorne Dreyer, is a prominent Austin-based activist and writer who was a pioneer of the ’60s underground press movement. The show’s engineer and co-producer is Tracey Schulz and the staff photographer is Roger Baker; Suzy Shelor is Rag Radio associate; Alice Embree is guest host; and Glenn Smith is our political analyst. The syndicated show is broadcast (and streamed) live Fridays, 2-3 p.m. Central) on KOOP, and is later rebroadcast and streamed on WFTE-FM in Mt. Cobb and Scranton, PA., on Houston Pacifica's KPFT HD-3 90.1, by KKRN, 88.5-FM in Round Mountain, CA, and at WALHRadio.com in Wilmington, OH -- and as a featured podcast at Veterans Today. Learn more about Rag Radio here.
Running time: 55:29.
Contact:  ragradio@koop.org.